Who doesn’t like a great snap of a crisp, fresh green bean with the creamy almond flavored butter and crunchy almond slivers?

It’s definitely a staple during the holidays. But its, unfortunately, not the best vegetable side to have on the Thanksgiving table. Going through the classic recipe, the average calorie count for Green Bean Almondine is about 190 calories and 128 calories is directly from fat. Now, wouldn’t you love to find a green bean dish without the worry of so much fat? I mean, you have to leave room for dessert, right?

Now this is not because I work for the company but I think Whole Foods Market has come up with the best healthy eating program that promotes low in fat recipes and fresh ingredients. “Health Starts Here” is their newest healthy eating initiative that is available online with many recipes and tips as well as in every single one of their stores. It has four main concepts that is essential to a healthy diet and for proper weight control. Those “four pillars” of healthy eating: 1. using healthy, unprocessed fats that come from avocados, nuts, and seeds, 2. keeping your diet full of vegetables and fruits, 3. using ingredients that are whole, fresh, and unprocessed, and 4. get more bang of your buck as far as calories and nutrients are concerned. http://www.wholefoodsmarket.com/healthstartshere/

So taking those four essential concepts of healthy eating will definitely keep you a few steps ahead of the curve when trying to get a handle on your diet and weight loss. Now needless to say, read up on it on Whole Foods Market’s website. I promise its the best thing for you and its convenient since they provide many of the recipes fully cooked and ready-to-eat at their locations in the prepared foods department.

So back to the healthy version of Green Bean Almondine. WFM calls this their Green Beans with Pecans and Clementine Dressing. It’s pretty awesome if I say so myself. With only 80 calories and 50 from fat, you give yourself extra room for a slice of that pumpkin pie! Enjoy!

If you have any questions about this recipe just leave a comment or email me at servemenowcatering@yahoo.com or tweet me at @servemenow or LIKE me and leave a message for me on facebook.com/servemenow!

Stay tuned for the next recipe! Happy Holidays!

GIVE THANKS FOR EVERYTHING BUT CALORIES

It’s Thanksgiving once again, my favorite holiday! The start of the season is always welcoming to cheer, friends and family, shopping, giving thanks, and CALORIES?

Every year we all know that when the holidays come, never too far behind is the gathering of friends and family. Whenever there are friends and family during these cold wintry days, what better than warm, comforting, and hearty foods to bring us all together. We always talk about either getting ready for those few pounds we knowingly and willingly gain for the holidays or create a plan to avoid them altogether.

Well this holiday season, you don’t need to shy away from those nostalgic recipes and comforting dishes that we all love. I’ll be providing a countdown to Thanksgiving along with healthy recipes for side dishes, appetizers, turkey tips, and desserts for the next ten days.

I’m going to take those classic and traditional Thanksgiving dishes and provide a healthy alternative for you to serve next Thursday. I promise to WOW your friends and family with how similar your dishes will be to its classic cousin and how tasty HEALTHY really can be. The recipes that I’ll be posting will be ones that I have adapted into my own holiday repertoire. They will be from various celebrity chefs, food magazines, Whole Foods Market (of course ;-p) and from my own recipe collection.

Let’s enjoy this Thanksgiving by being surrounded by our loved ones and not by worrying how many pounds we are going to gain. The day after Thanksgiving is not BLACK FRIDAY because the color is slimming! Let’s get through this holiday the healthy way.

If you have any requests for a healthy alternative recipe or for a dish you want me to highlight that you were too afraid to tackle, just ask! Leave a comment for me here on my blog or email me at servemenowcatering@yahoo.com. You can also LIKE me on Facebook under Facebook.com/servemenow. Follow me on twitter at @servemenow! Happy holidays!

“Hatch is the TRUE flavor of New Mexico. Flame-roasted, mild green chiles have been part of the New Mexican cuisine for over 400 years. Hatch has its own unique taste, not Tex-Mex, not Mexican…” -Steve Dawson Founder/President of Hatch Chile Company 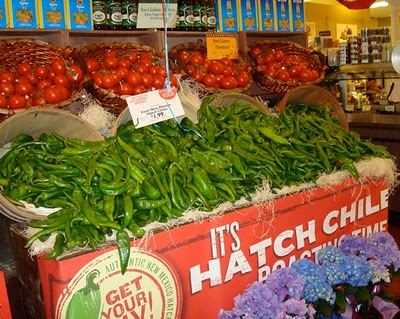 The hatch chile is widely known for its amazing flavor especially after being fire-roasted. It originates from Hatch, New Mexico. It’s harvest season only comes once a year at the end of the summer. Enjoy this hatch chile in replace to any recipe that you would normally add any kind of jalepeno, habanero, or serrano. It’ll add a much smokier and stronger pepper flavor than most pepper out there. Remember, to get the best flavor out of them, fire-roast them on a grill or even over your gas burner in your house. After charring the skin black, keep it in a brown bag or container, let the heat and steam from the pepper do it work while covered, then peel off the charred skin. Viola! You have an amazing hatch chile pepper!

My Hatch Chile and Grilled Corn Salsa recipe best serves up to six people. It’s great as a side for grilled beef, chicken, pork, and fish! It can also stand well on it own!

On September 3rd & 4th, 2011, Hatch, New Mexico will be having their annual Hatch Valley Chile Festival. Check this link out for more information! http://www.hatchchilefest.com/

Directions: Chop and prep all vegetables and add them to a mixing bowl. Drain can of black beans, quickly rinse off starchy liquid and add to the mixing bowl. Add your rice wine vinegar and season to taste. Keep cool before serving.

Tongue & Pastrami at the Carnegie Deli

Most people who grew up in the tristate area have heard of the famous Carnegie Deli of NYC. From the elite to the layman and the foodie to the hungry, the Carnegie Deli satisfies all! 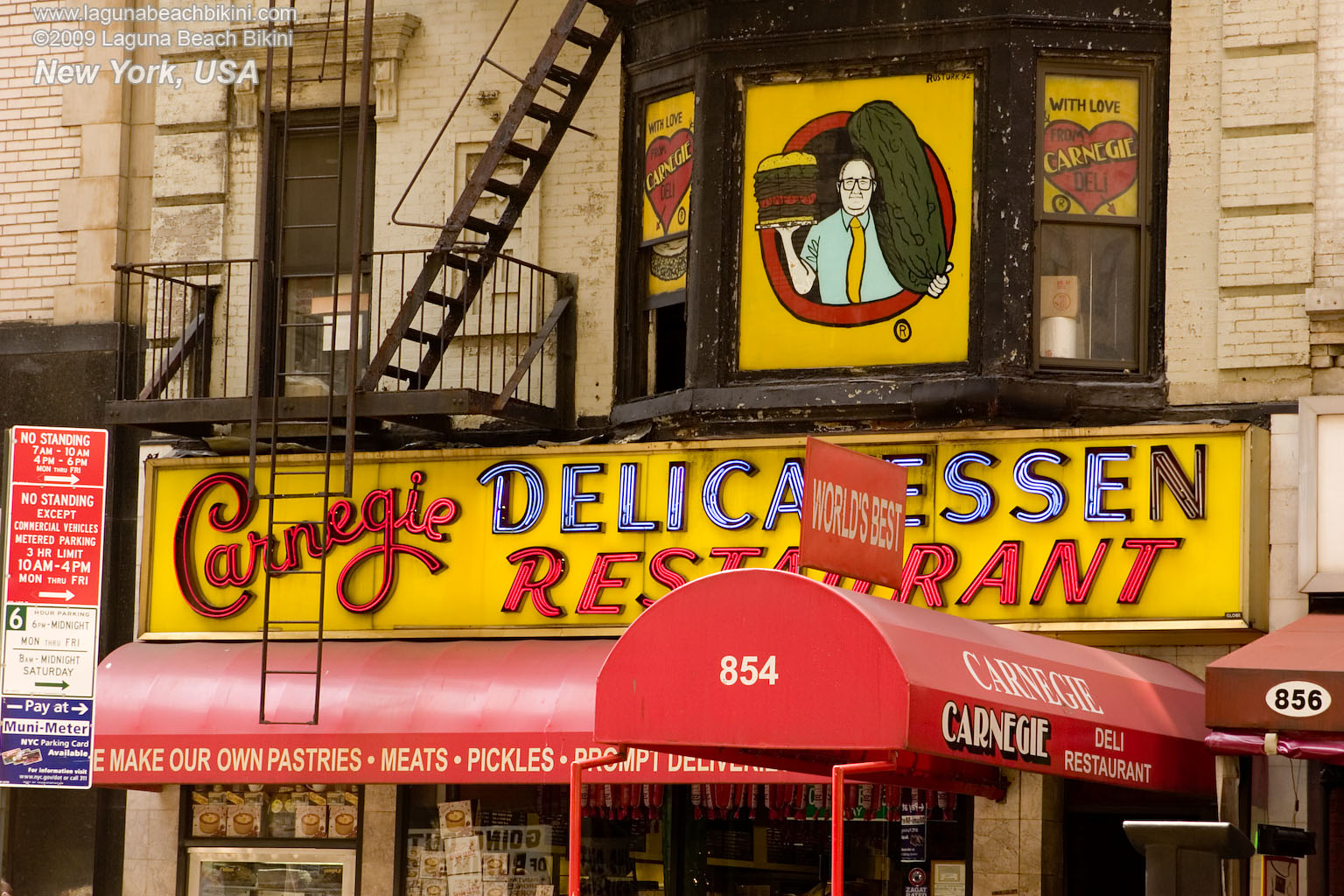 This recent trip to NYC was my very first time at this deli. Living in NJ for 20 years never even brought me to this sandwich haven. But after numerous times seeing on the Travel Channel in shows such as Bizarre Foods, No Reservations, and Man Vs Food. At every angle, I’ve been exposed to what amazing food the Carnegie Deli has to offer.

Just around the corner from to Dream Hotel where we enjoyed the rooftop lounge, the bright lights of the deli called out to us. Walking in at 3AM, the deli was scattered with a handful of patrons and the restless servers and kitchen staff. You could tell we weren’t the only ones there to soak up all our alcohol. The walls were adorned with many picture of famous diners. It was like a “Who’s Who” for the Carnegie Deli. As we were seated, we were greeted by Desmarie, a twenty-year veteran server at the deli. She was the brightest soul in the room. I fell in love immediately. I actually kept telling her that I loved her and that I wanted to call her ‘Angel!’ she just nodded with approval.

My best friends, dancers/instructors from the Dance With Me studio in SoHo of NYC, decided to share one of the mammoth sandwiches. They ordered a Hot Pastrami and Swiss served on rye with a side of thousand island dressing and coleslaw. They were a bit disappointed that the Swiss cheese wasn’t melted but hey, they don’t advertise, “Have It Your Way!” as you walk in! They both agreed that it was definitely tasty and did the right job for the night. They definitely made the right choice splitting one sandwich because they were only able to finish their own half. 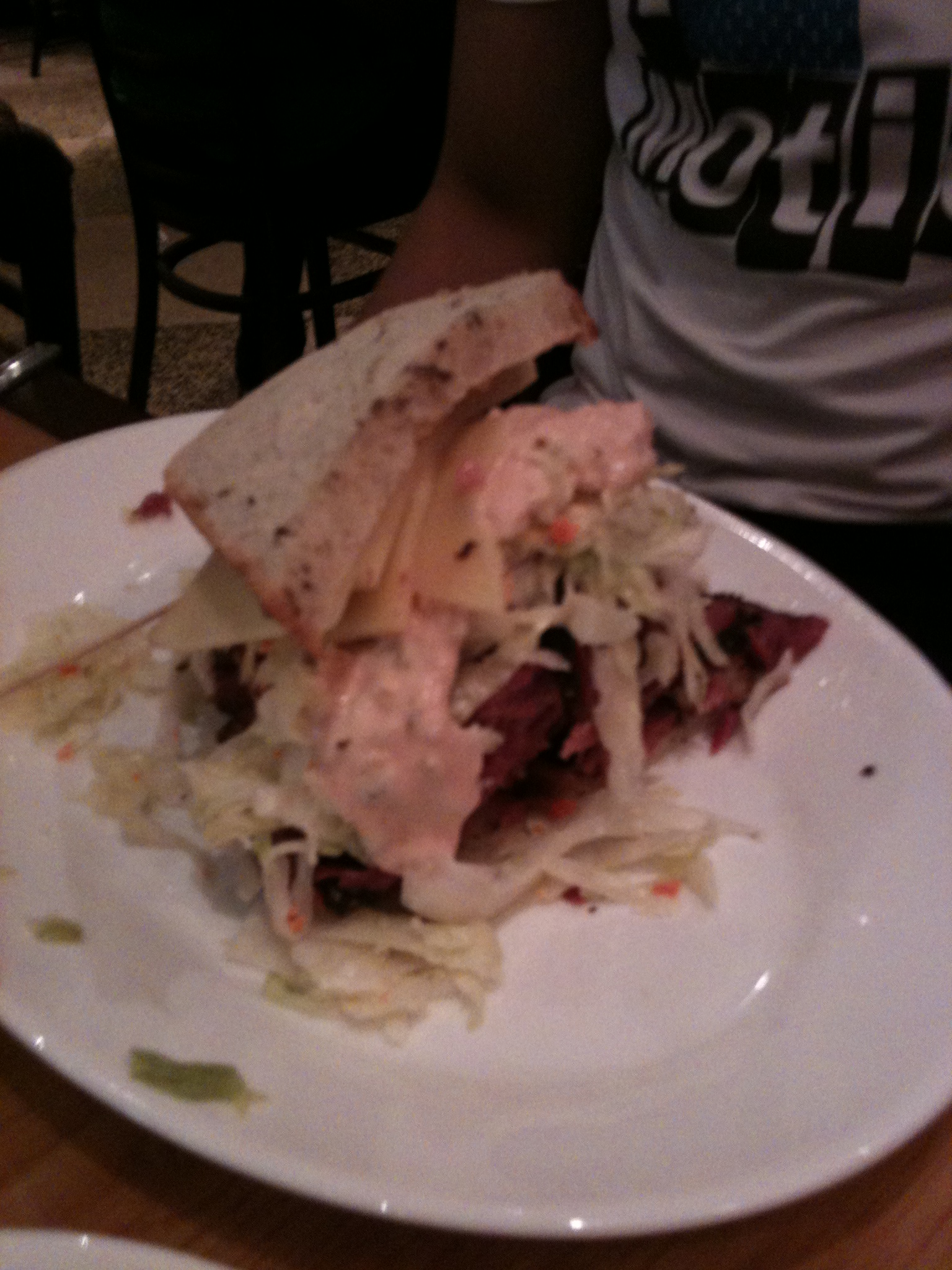 Questioning what I should order, I asked Desmarie for her opinion. Beef tongue? In an instant, she offered a sample of the thinly-sliced, full-flavored beef tongue. It was a winner. But since I felt just still a little squeamish, I ordered half Hot Pastrami and half Beef Tongue! With a side of sauerkraut, sour pickles, and the original Carnegie Deli mustard, I was all set!

“How do I attack this thing? Do I fork-n-knife it or just tackle it with hand-to-mouth?”

It was just what I expected. The warm, sweet, salty, and peppery flavor of the pastrami paired well with the beefy, almost bologna-style, flavor of the tongue. The pastrami helped somewhat mask the thought that you were eating tongue. Delicious nonetheless, this sandwich was everything I imagined. Oh, and if you don’t have it with the Carnegie mustard, you might as well not eat there at all!

One of my friends commented that they liked Katz Deli pastrami a lot better. Now, I’ve never eaten at Katz and remember, this is my first time at the Carnegie Deli. But all it did was give me a reason to visit Katz! Have you eaten at both places? I want to hear your opinion. Leave a message here and tell me if it’s worth it to visit Katz Deli or keep to Desmarie’s loving attitude at the Carnegie Deli! 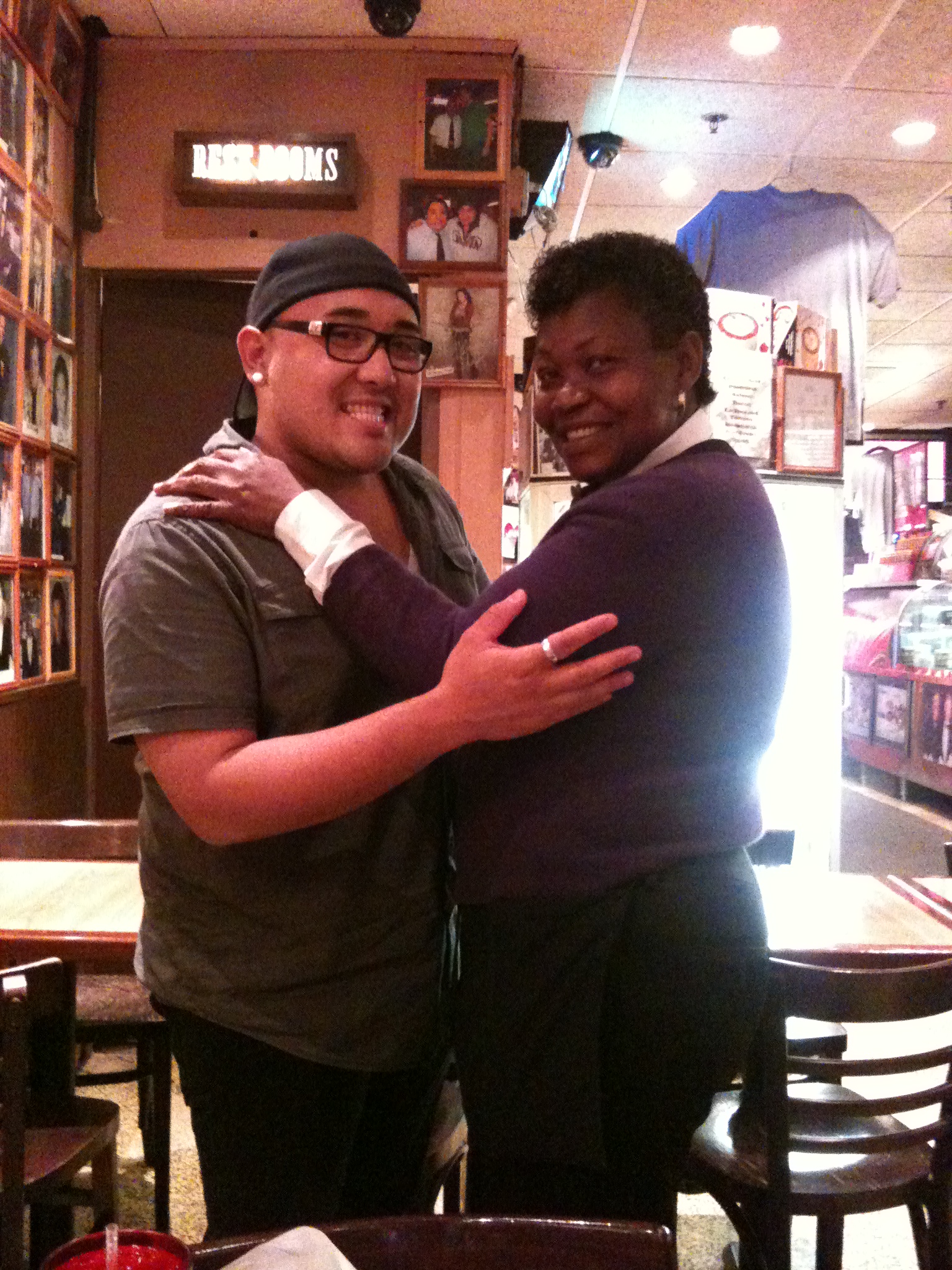 Boil water in a medium pot. Score bottom of peaches with an ‘X’ and blanch in boiling water for 10 seconds. Remove from water and place in a ice-water bath. When cool, peel peaches. In a saucepan, saute onions and jalepeno, in the canola oil. Once cooked down, add the peaches and cook for 10 minutes on medium heat. Add the remaning ingredients. Cook for another 10 minutes or until all ingredients are incorporated. Remove from heat and let cool for 10 minutes. Place mixture in a blender and puree until smooth. Be careful with blending hot liquid. Cover and store in the refridgerator up to 3 days in advanced. Bring back to a boil and reduce to a simmer before serving!

This is definitely best served on some all-natural, grain fed beef or all-natural, air-chilled chicken! If you serve it with grilled peaches, you’ll umph the flavor up to 10x! ENJOY!

Leave comments for any questions! Tell me if you had any problems and if you’ve made any variations. I’d love to know how it all turns out! take pictures and post!