On my first day in New York City, I took my friend around and hit up all the famous touristy spots. I wanted to go Uptown on the Upper West Side and check out Strawberry Fields in Central Park. My friend is a big Beatles and classic rock fan so it was definitely a must! Waiting for the A or C train from Penn Station, we were taking pictures and playing Scramble With Friends on the platform. Distracted(and addicted), we ended up hopping on an E train towards Queens. After realizing where we were going, we jumped off at the 5th Ave/53rd Street station just southwest of Central Park. We walked up 5th ave and decided to check out the East Side since we were in the neighborhood.

My friend is an amateur photographer so NYC was like being in a playground with a new toy in hand. Showing him the shops on 5th Ave, FAO Schwartz, and the old Plaza Hotel we stumbled onto the entrance of Central Park. At the southeast corner, there was a food truck stationed welcoming guests in and out of the park. We walked over since it seemed interesting and definitely emitted plenty of delicious scents. We stepped up to the Grilled Cheese truck by the The Food Freak. 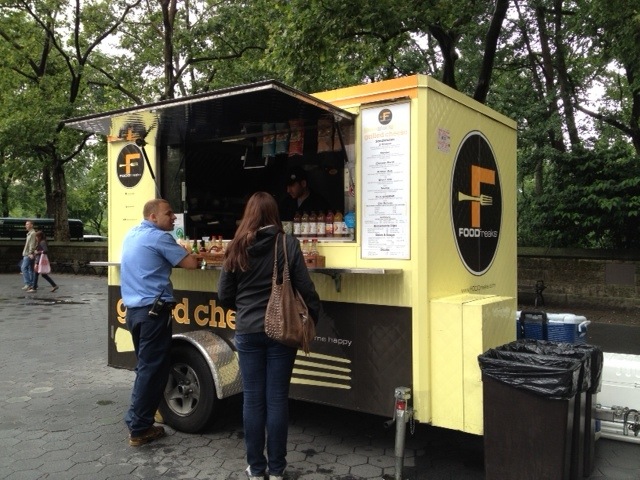 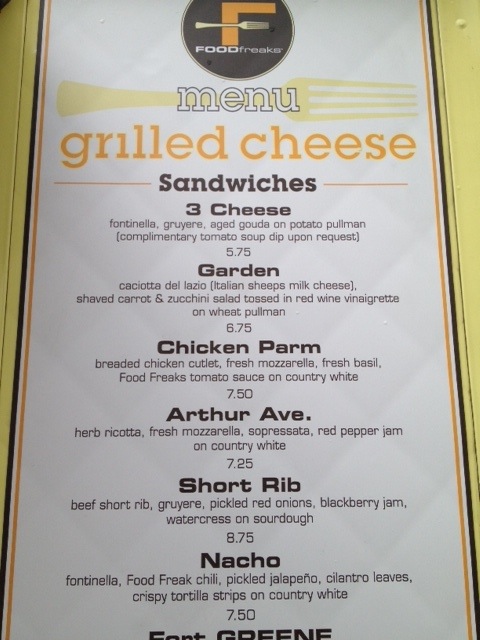 My friend and I we greeted by Steve and Jon, two of the three partners in this foodie station. 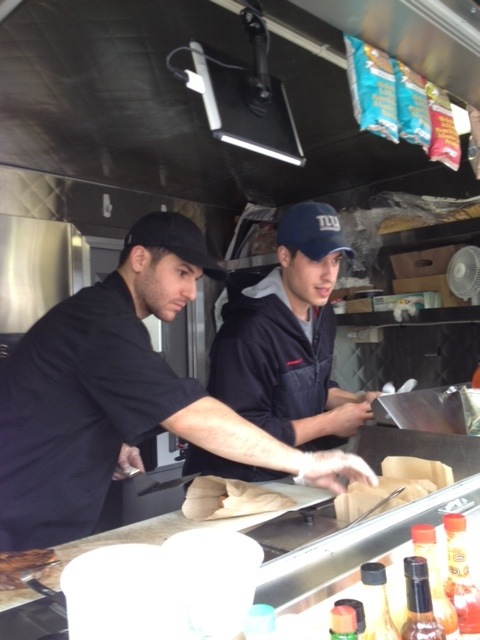 I immediately introduce myself and I automatically new these two were the real deal. We looked over the menu and they couldn’t help but walk and talk us through what they offered. Mind you, I knew I probably couldn’t at about 95% of this food but my friend could so why not try it out. Let’s see what they had for me. Their concept is simply delicious. Who doesn’t enjoy the comfort of great homemade crusty bread and melted, gooey, lovely cheese?! (Well, I guess a plant-strong eater but that’s a given!) Then, to pair it with a homemade VEGAN, yes I said, VEGAN, tomato soup is ingenious. Here’s the menu, they have specially designed sandwiches created by these guys and then they have a kind of ‘build-your-own’ known as the Old School.

Pick a cheese, a bread, a dip (if you want) & any additions.

Depending on the cheese, the sandwich ranges from $4.75 to $5.25 plus any additions. 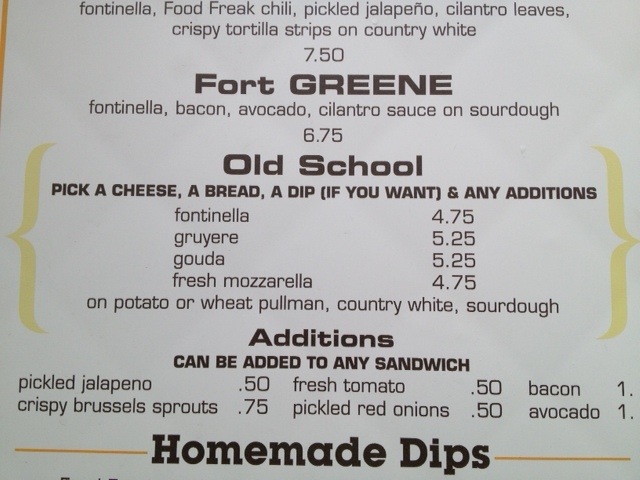 Along with the sandwiches you are going to need a dip, soup, or appetizer, right? RIGHT! They had us try fried brussles sprouts! Fried, yeah I know, but remember, that’s one thing I can’t seem to get away from being plant-strong. I’m working on it, ok! Anyhow, seasoned with sea salt and ground white pepper, YUMMMM! Perfectly crisp, sweet, salty, and savory! Everything you would expect from fried brussels sprout.

Then, they had us try their signature chili. Signature and spectacular! Why you ask? Because what would you say to a chili made with Blue Moon Brewery’s Belgian White beer? Exactly! Signature and spectacular are the words I’d use to describe it. One of a kind with a sweet deep malt flavor. They served us a sample topped with pickled jalapeños and cilantro, the perfect accoutrements. For only $5 for a small or $6.75 for a large, I’d recommend getting a 3 Cheese with a side of the Food Freak Chili and you’d be all set! 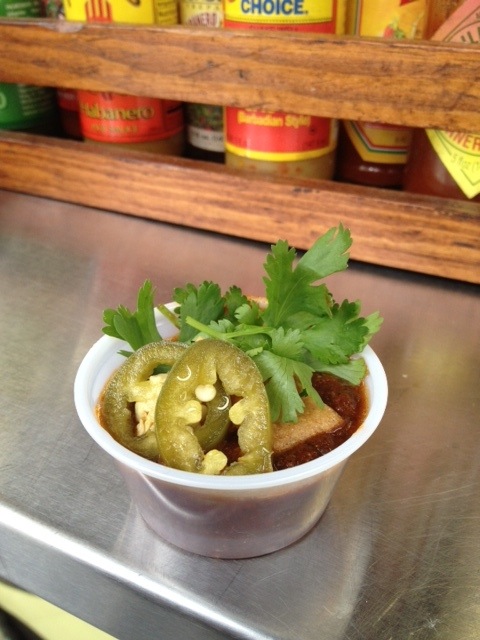 Now the ‘piece du resistance’ was being grilled up for us while all this tasting was going on. The Short Rib Grilled Cheese sandwich featuring braised beef short rib, gruyere cheese, pickled red onions, blackberry jam, watercress on sourdough! Whaaaaat!?!?!?! Honestly, by far the best short rib sandwich I’ve ever had. I’ve been to plenty steak houses serving these sandwiches for lunch and they don’t even come close. The proper crunch of the sourdough, tenderness of the short rib, and the blackberry jam, that’s what makes this the best. The combo of sweet from the jam, savory from the short ribs, tanginess of the onions and the pepperiness of the watercress, score! 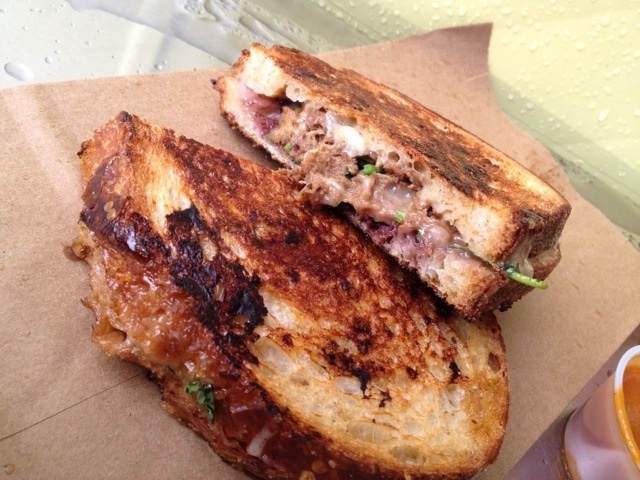 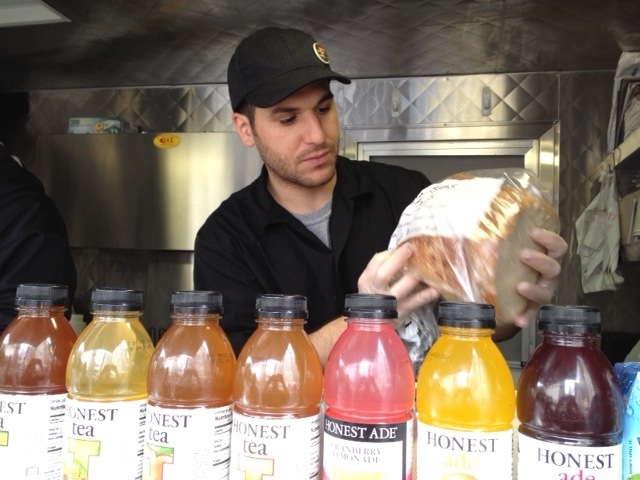 What?! Am I a little over the top about this place? Well, guess what, they deserve it! They’ve only been open for 8 months in the city. The Food Freak has an awesome concept of what food should taste like. If I had weight in choosing best new food truck in the last year, I’d totally choose these guys! And for those of you who know me, I paid for my grilled cheese sandwich! I’m a cheap blogger. If I like something that I pay for, I’d need to love them in order for me to even decide to write a blog Meaning, I didn’t have to give them a good talk but it was definitely well worth it.

I asked them about having a possible vegan option, maybe using Daiya cheese?! They said they’ve tried it and offered it but it was something that never stuck. Honestly, if I knew that they had a vegan option for sandwich and soup, I’d be there all the time. What do you think Vegan friends? You’d be there too! For now, bring all your friends and family to this awesome concept truck. Then when they have the vegan option, we can all go there together and celebrate. Haha. Steve, Jon, and Dave, if you need ideas I have a few recipes up my sleeve for a good vegan and even plant strong grilled “cheese” sandwich. Let me know!

They were so awesome that they were featured in the NYTimes… 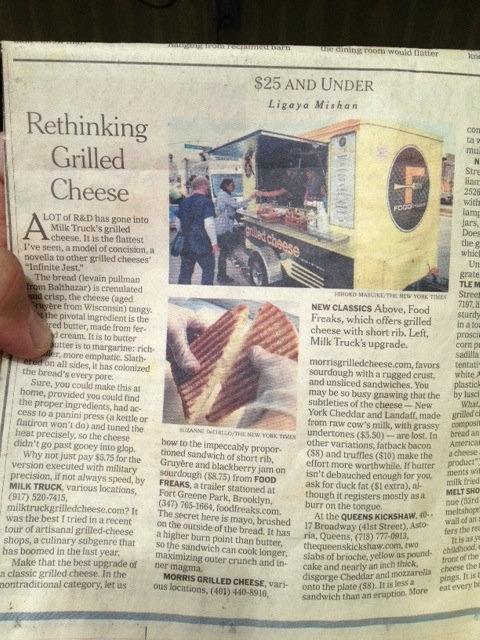 I featured this chili recipe at my last Engine 2, 28-Day Challenge cooking class at Whole Foods Market, Henderson. it was a hit with the challengers as well as the “meat-eaters” back in the kitchen. This “Super Bowl Chili” is great for tailgating and for your next family gathering. I’m positive it’ll hold up at your next company Chili-Cookoff but just make sure you give me some kind of credit. ;-D

This particular chili recipe has been transformed three times before it was made into perfection. It started out as a friend’s vegan chili, then into my turkey/meat chili, then into this magnificent creation. This is everything a chili is described to be, hearty, spicy, bold, and comforting but of course built with my own spins and secrets. I promise that once eating this chili you may not go back to that boring crock-pot stew. If anything, take this as a base or guideline and run wild with it. 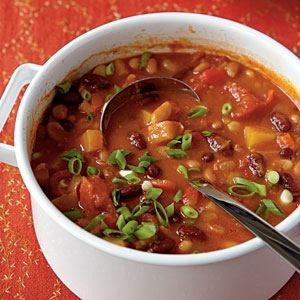 Remember that this recipe and all of my PLANT-STRONG recipes will always be free of processed oils, meats, dairy, and extremely low to no added sodium!

What I love about this dish is that you get your complete proteins along with plenty of natural sources of vitamins and minerals. It’s also high in fiber and flavor! Like I said, use this as a guideline and add your favorite vegetables to this. Have fun with it and explore the seasoning section of your local all-natural grocer (WHOLE FOODS MARKET) and have at it. Remember that seasonings always count for “free flavor.” what I mean by that is that using dried herbs and seasonings pack your dish full of flavor and absolutely no calories! 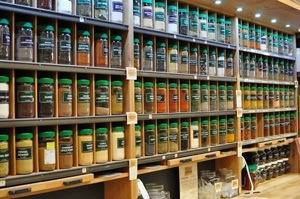 If you liked this blog or want the full recipe for this or any other dish, subscribe and leave a comment. You can also email me at servemenowcatering@yahoo.com.